Opinions, opinions, opinions here and there. . . . Favorable and contrary opinions about something. . . . One’s opinion versus another’s. . . . One’s opinion being better than another’s. . . . Opinions expressed discursively are aimed to communicate and acts of communication are technically “speech acts.” [cf. J. L. Austin’s and John Searle’s theories of speech acts]. Every speech act has an intent: to state a fact or to describe a state of affairs [cf. Ludwig Wittgenstein’s Tractatus], to assert a belief, to ask a question, to command, to request, to wish, to bequeath, to appoint, to utter a reaction (based on certain feelings or impressions) in favor of or against a belief, to express a feeling or desire and more.

When one expresses an opinion, it may be an assertion of a belief or an utterance of a reaction in favor of or against a certain belief. An opinion is therefore not a matter of fact but a matter of belief and hence may not be sustained scientifically or corroborated factually, at least at the very moment when such opinion is expressed but without barring the possibility that future developments could finally substantiate or demolish it scientifically.  Being so, an opinion about a belief may either be cogent (i.e., rationally convincing) or not. Thus, an opinion is reckoned as much better and more credible than another if it can stand the test of formal logical reasoning using either the technicalities of:

Opinions disqualify as scientific statements and preclude a direct appeal to facts for evidence or proof. The merit of an opinion (that one opinion is better than another) depends on its logical consistency. However, in the case of a belief about which an occurrence of a number of opinions both cohering and contradicting have issued out and where several logically tenable (i.e., meritorious) opinions are available, the second-level determinant is consensus which is generally tested not only in terms of the number of adherents but also in terms of its pragmatic worth.

In the light of the present discussion, no one can seriously and meaningfully claim that her or his opinion is better than another’s if the former fails the test of formal logic and/or pragmatic signification.  This view, of course, does not apply to statements of scientific substance for such statements do not intend to solicit personal advocacies dependent on feelings and impressions but are subject to investigation through factual observation and/or experimentation. 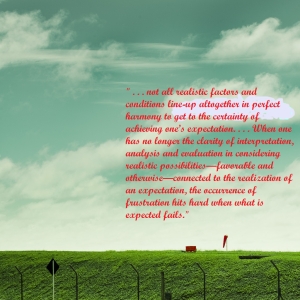 On the basis of David Hume’s epistemological categories of “necessary connection” which is a matter of logic and “constant conjunction” which is an empirical matter, the semantic relation of expectation and frustration cannot be reckoned in logical terms and hence no necessary connection may be established between them. In other words, there is nothing in the meaning of expectation that necessarily leads to the meaning of frustration. So that when one expects something, frustration doesn’t necessarily follow. However, as matters of experience, frustration occurs in relation to expectation when that which is expected is not realized. Frustration is hence a possibility when one is expecting for something. But it is not always the case that frustration follows every time there is an expectation. Fulfilled expectation, of course, does not result to frustration.

As matters of experience, an attitude of expectation and a feeling of frustration are within the ambit of the psychological. The object of expectation could either be concrete (i.e., in space and time) or abstract (i.e., in the mind) while the feeling of frustration is necessarily mental. As an attitude, expectation under normal circumstances is realistic, for what kind of a person in his right mind would expect of something that is not achievable with respect to certain factors and conditions of reality as distinguished from fantasy. In this connection, frustration as a normal feeling occurs only when upon considering all realistic factors and conditions, something expected has failed to happen. This consideration brings us to a higher level of awareness that not all realistic factors and conditions line-up altogether in perfect harmony to get to the certainty of achieving one’s expectation. Besides, these realistic factors and conditions themselves which are associated with expectation as a focusing on the future lack the certainty and concreteness of what is present here and now. They may be realistic in a lot of ways but being of the future, they are yet possibilities. At this point, we can semantically distinguish “realistic” from “reality.” Hence, a possibility is realistic, meaning it is achievable, but it is never called a reality prior to realization. When one has no longer the clarity of interpretation, analysis and evaluation in considering realistic possibilities—favorable and otherwise—connected to the realization of an expectation, the occurrence of frustration hits hard when what is expected fails.

As matters of psychological importance, expectation and frustration have their degrees of intensity from the level of the rational to that of the irrational. High rationality that operates in one’s expectation opens a variety of alternative states of affairs and in the process tempers the irrational tendencies that could easily seep into an initially sober attitude of expectation due to emotional pressures. In other words, expectation within the range of the rational is more likely less frustrating when it fails to materialize.

One was an accomplished guitarist in a corner along a corridor of Madrid Metro’s Avenida de America station skillfully strumming and plucking a popular sentimental favorite of the 70s . Then along another corridor of the same station was a consummate cellist whose flowing music of classical vintage revealed an enduring and outstanding stint in a symphony orchestra of world-class caliber. That was almost a couple of months ago. After a week in the same Metro station, an impeccable saxophonist was dishing out his masterful rendering of smooth jazz equalizing the finesse of the celebrated Kenny G. Yesterday at the Cuzco station, an expert accordionist was sharing to passersby his savvy execution of Abba’s classic, “Chiquitita”.

They are the subway virtuosos of Madrid’s musical opulence; a city perpetually hailed as one of Europe’s paramount hubs of exquisite endowment. And it is never preposterous to say that this metropolis of blithesome countenance in normal circumstances  is gracefully gifted with oozing talents of aesthetic grandeur. It has had its heydays and low-points but only in this period of depressing economic crisis when things have hit rock-bottom that the limelight has been turned off on the dazzling stages where these virtuosos used to evince their most electrifying performances. But even if their new-found platforms of performance are Madrid’s subway stations, nary a sound of grieving tune emanates from their instruments of rhythmic resonance. These creative souls that reflect the undying elan of  an ever hopeful humanity are the avatars of indomitable essences that unceasingly inspire us in the midst of seemingly irreversible afflictions during the darkest moment of the night. 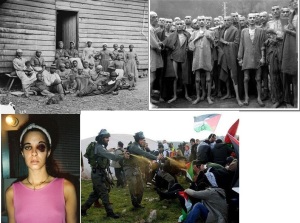 On the issue of the culture of victimhood, we are talking of a widespread mindset that dominates a social group. We may discuss in general terms the collective experience of victimhood in a social group or specifically focus on the particular circumstance of a group member’s victimhood which is deemed to be a fitting representation of the culture of victimhood in such social group. In this sense, we are not simply dealing with an isolated situation of an individual person’s victimhood but of a predominant condition of human disempowerment. It is therefore significant for us to get to the factors that led and have continued to sustain the dynamics of the culture of victimhood in the context of a social group. To make sense in the process, one basic consideration is the fact that there are victims and victimizers and the act of victimization which as we have earlier said is supposed to be widespread so that it has actually created a culture. As we analyze the distribution of power in this consideration, we find on the one hand that logically, the victimizers display an enormous amount of oppressive ascendancy over and above their victims to undermine and disempower the latter.

The culture of victimhood is a state of affairs we could liken to an event in war between tribes or nations where one defeats, overpowers and invades the other. The defeated party are disarmed and rendered helpless and whose existence ultimately depends upon the mercy of the invaders. We see this instance of the culture of victimhood in the Biblical account of the Babylonian captivity of Judah (the southern kingdom of ancient post-Solomonic Israel). And even at the earliest stages of the formation of Israel as a nation, the Biblical story of the enslavement of the Hebrews (where Moses later became their leader) in Egypt typifies a case of the culture of victimhood. The disempowerment and later the annihilation of millions of European Jews in the Holocaust at the outset and subsequent rise to power of Hitler’s Third Reich was one more historic event that illustrates not only the dynamics but the mechanics as well of the culture of victimhood in the modern era.

World history is replete with wars, invasions and colonizations that have given us a panorama of concrete events demonstrating large-scale configurations of the culture of victimhood where the possibility of successful resistance to overcome oppression, exploitation and violation of human dignity was at its lowest if not entirely precluded. In a state of absolute disempowerment, we could say that no amount of immediate active resistance may be operational but has to be spawned within a protracted period of time to break the culture of victimhood and finally achieve liberation.

In the more recent contemporary period, we have witnessed how large-scale culture of victimhood transpires in discriminatory imbalances in the areas of race, sex, religion and economic status among others. In so many instances, we have likewise seen the proliferation of resolute and strong undertakings of open resistance as acts of vehement defiance exposing and opposing a culture of victimhood by way of movements of outrage that ensue with a sizeable corpus of hard-print and online manifestos, pronouncements, treatises both academic and popular, even volumes of manuscripts along with public speeches during street rallies and organized forums, conferences and big-deal congresses both local and global.

However, this episode of collective magnitude is made possible only by a cabal of educated and free-thinking denizens in a socio-political atmosphere of open toleration where contending, even contradicting, beliefs and advocacies, differing views and opinions, are freely expressed and ventilated in fair public hearings. As a major condition, being “educated” doesn’t necessarily mean that the person is formally “schooled” and to a certain extent academically “degreed”.  This particular circumstance of being educated is more on having a comprehensive grasp of one’s state of affairs in a culture of victimhood about which her/his self-reflexivity has led her/him to come to a definitive realization by virtue of being in possession of the necessary tools of criticism, analysis, synthesis and facility of discourse.

Within the confines of a repressive collective situation where the psycho-social conditioning of people is either shaped up and domesticated by the dominant cultural machinery of a religious or political system, breaking away from the culture of victimhood is a herculean struggle if not an utter hopelessness. In the first place, these people do not have the facility to perceive themselves as victims of an oppressive or exploitative social frame. Hence, the “normalcy” of their circumstances will never make them realize their state of victimhood and not a single triggering idea will ever lead them to see the necessity to desire liberation. Exposure to a wider reality where these people would have the opportunity to compare their situation with freer, more tolerant and more open social groups is the most promising threshold of “education” wherein new and fresh insights spontaneously permeate their frames of mind. Only this could lead them to realize and hence ultimately break their culture of victimhood.