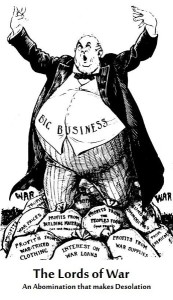 [Acknowledgment: This paper is partly based on Prof. Dr. Ola Tunander’s “Securitization, Dual State and US-European Geopolitical Divide or The Use of Terrorism to Construct World Order,” a paper presented at the Fifth Pan-European International Relations Conference, Netherlands Congress Center, The Hague, 9-11 September 2004]

The “deep state” is a concept that necessarily connects with the power structure of the United States of America (US). It stands in parallel with the legitimate government of the US and whose main function is to “securitize” the democratic foundation of the government as well as the institutions that represent and strengthen that government. It is, therefore, the fundamental responsibility of the “deep state” to protect the US government from both internal and external attacks aimed to undermine and destroy its democratic underpinning. It is precisely the reason why the “deep state” is more technically known as the “security state”.

The world, in general, has been conditioned to believe that the legitimate US government is the leading paragon of democracy. Hence it is principally construed that any attack against the US government is tantamount to an assault to democracy. This mental programming has created a condition that weaves the fiber of democracy with that of the US government. In literary critical analysis, we call it “telescoping”. In telescoping events, the characteristics and properties unique to each event are blurred and rendered insignificant to the point of unifying such events and hence making them identical. Expressing such a situation in the formal logical propositional pattern, “There is an x such that if x then y,” yields the following substantial statement:

And to prevent such an attack against the US government or to defend the US government from such an attack, as the case may be, the “security state” which, under normal circumstances stands at par with the “legitimate democratic state,” takes control of the present abnormal situation using its autocratic power. In other words, when circumstances are normal, power is tilted on the side of the legitimate democratic state while in an emergency situation, it is on the side of the autocratic security state. This condition is theoretically deemed as a matter of exigency and therefore temporary. By and large, the essential dynamic that constitutes this state of affairs is drawn from the non-negotiable importance of “securitization” to defend and protect the “genuine” bearer of the ideals of democracy which is the United States of America.

Nevertheless, what we simply see at the moment is the epidermal surface that projects the finest and the best of what this “prime model” of democracy exudes. Yet, there is more than meets the eye. Under the superficial configuration is a more complex network of hidden infrastructure reckoned to be more crucial and paramount than any of those located overboard and visible to the naked eye. Like in the case of an iceberg, what we see is just the diminutive tip but the bulk of its solid formation is deep underneath. And this is precisely comparable to how the security state operates to which we give the alternative epithet, “deep state.”

What the deep state/security state is concerned about is more than the democratic state of the US government. It is more concerned about the massive business industries comprising the multiplex cogs of US economic enterprises that dominate the globe. These are the machines that are in full control of the US government. In other words, the latter doesn’t possess the power inherent in itself but draws its strength from these colossal industrial establishments of global magnitude. In this connection, what we see is a government beholden to big business industrial conglomerates and whose decisions and actions are incontrovertibly at the behest of such business industrial giants. These are the “omnipotent” gods that the deep state/security state defends and protects.

The whole gamut of this arrangement leads us to a confirmation of the reality that the socio-political fabric of the United States of America is just a semblance of democracy–a counterfeit democracy. Its government, contrary to the Lincoln formulation presented in the Gettysburg Address, is not “of the people, by the people, for the people.” The US government is of the big business industries, by the big business industries, and for the big business industries. What its citizens get are just the bread crumbs that fall from the dining tables of their “all-powerful” gods–the industry tycoons who own the machines that run the US economy. These are the mighty economic dictators who walk the corridors of power and are actively defended and closely protected by the deep state/security state.

The deep state/security state’s clout goes beyond the geographical location of its protected and defended “land of the free and home of the brave.” Its power is felt in every country where the US foreign policy reigns supreme. It dominates the western European region through its proxy known as the North Atlantic Treaty Organization (NATO). In Southeast Asia, it lords over the member states of the Association of Southeast Asian Nations (ASEAN). Its aggressive posture has been tremendously exerted in the Middle East as it creates all forms of destabilization campaigns mostly by way of wars in Afghanistan, Iraq, Libya, Syria, and Yemen with the able assistance of its destructive allies, Wahabbist Saudi Arabia and Zionist Israel. To promote and protect its economic interest in the Eastern European region, it has made all possible aggressive efforts to hold Russia at bay with veneer threats of violent confrontation if Russia reacts with an air of hostility. In South America, it has been fueling destabilization in Venezuela to topple the democratically elected government of Nicolas Maduro and take full control of the country’s petroleum industry. In the most recent developments, it has been challenging Iran into a nuclear war which, on the basis of certain honest-to-goodness assessments made by experts in the field of geopolitics, is nothing but a hot-air provocation, i.e., an empty bluff.